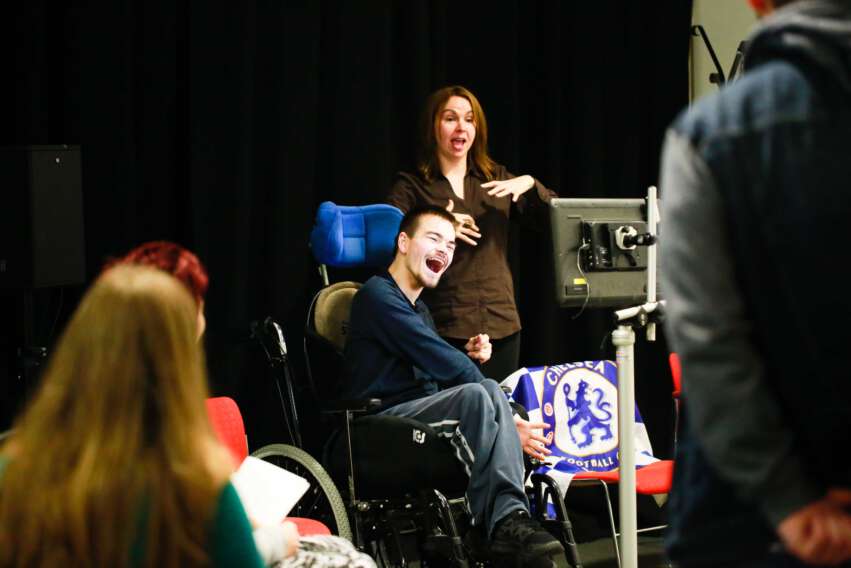 This Summer, filmpro was delighted to collaborate with Graeae on a series of short films presented by Rinkoo Barpaga, focusing on the careers of Deaf and disabled artists.

Click on the links and images below to view the films. All videos feature BSL interpretation, Audio Description and Captions.

Dave is a performance poet, artist and an activist in the promotion of inclusive theatre practices. He promotes self expression and creativity, and everyone having a voice to share their stories and experiences. He is a graduate from the first year of Graeae’s Ensemble programme in 2016.

Amelia Cavallo is a queer, blind multi-disciplinary theatre practitioner. As a performer, they work as an actor, singer, musician, circus aerialist, dancer, drag king and burlesque performer. For Graeae, Amelia has been seen in productions including The Threepenny Opera and The Garden. They have also worked in academia, teaching and consulting on audio description. Most recently, they have started co-running a creative project called Quiplash, a company that takes space for Queer disabled people.

David Ellington is profoundly Deaf and a British Sign language (BSL) user. David discovered his talent for acting in 1997 when he performed as part of the Deaf Festival at the Swan Theatre. Consequently he landed a presenting job with BBC Education, which helped him to pursue his career in television, film and theatre. Since then, David has enjoyed being involved in numerous acting and experimental film-making projects. He has been part of multiple productions with Graeae (including Bent, Diary of an Action Man and The Garden), he won Best Actor for DEF in the Deaf Oscars, and he was also part of the London 2012 Paralympic Opening Ceremony. In the summer of 2016, David landed a ground breaking in-vision signer role on TV trailer  ‘We’re The Superhuman – the Road to Rio’ and on a Channel 4 Paralympic TV commercial.

Chisato Minamimura is a Deaf artistic director, performer, choreographer and BSL art guide working globally with a particular interest in the visualisation of sound and music from her Deaf perspective. Through this work, she uses dance and digital technology to share her experiences of sensory perception and human encounters.

Sonny Nwachukwu is a writer, director, choreographer and performer based in London. His work is multi-disciplinary spanning across writing, poetry, dance, theatre and anything that lies beyond. His work primarily focuses on the African and Caribbean Diaspora.