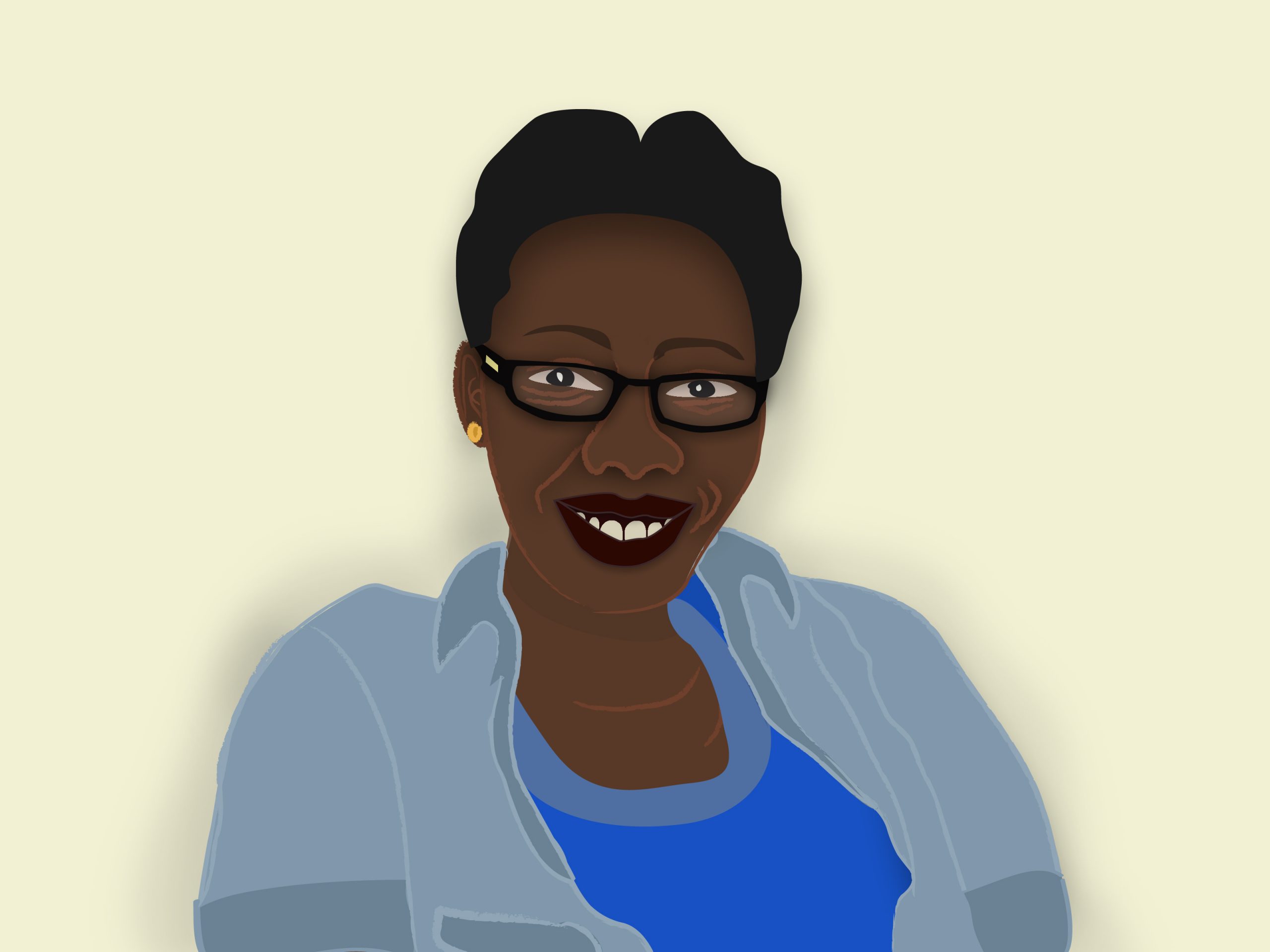 We continue our series of artist interviews with illustrator Doreen Edemafaka, hearing about her latest project, envisaging an accessible utopia, among other things. Read the full interview below.

Hi Doreen, what’s interesting you at the moment?

With Covid-19, it’s hard to find something interesting. I am currently into the children’s animated series Madeline, because I like the illustration style used in it. The animated TV series is based on an illustrated book with the same name and the style of animation draws on the illustrations done by Ludwig Bemelmans. I am currently working on a short film project written by writer Maria Zavakou, who is a friend of mine. I really would like to base the style of the animation on the Madeline illustration because I think the child-like 2D drawings would suit the project very well.

Can you tell us a bit about how you started working in the arts?

When I was little I wanted to be a fabric designer. I wanted to design the kind of
patterns that were on the cloth my mother wore, so I used to draw patterns in my
books. I also liked animation. I used to draw characters from the animations I had
watched, films such as Disney’s Peter Pan, Jungle Book, and Beauty and the Beast. I
didn’t go to primary or secondary school; I was home-schooled in Math and English
by my sisters. By the time I was in my teens my interest had changed to computing
so I studied computing at Lewisham College and during a programming project I
chose to do animation, thus connecting my two interests together. Also, at that stage in my life, the drawing wasn’t the only thing l liked about animation, I had also become interested the movement of the characters. I loved how every gesture and every movement made by each character helped to tell the story the animator had intended. I remember watching the making of Finding Nemo when it came out in 2003. I watched the animators talking about how they had to experience everything the characters went through in order to be able to deliver a believable animation. To achieve this they all had to take deep sea diving lessons. This made me wonder at that moment whether, as a wheelchair user who has less mobility with my hands and feet, maybe if I were to become an animator I could experience movement again through it. So in 2006, when it was time to pick a course to study at university, I chose animation. I still remember the first time I did a walk cycle I had to dig deep into my memory to remember when I was able to walk. I watched videos of people walking. I looked at animation guidebooks, which broke down step by step how a person walks. It was hard and exhausting, and I loved and hated every moment of it. I hated it because it required a lot of research and I had to keep remembering each step because I kept forgetting the cycle I was on as I drew. I was also worried that my finished work was going to be different than what my classmates did because I was the only wheelchair user in the class. I loved it because it rekindled memories I thought I had long forgotten about the days that I could walk. The end result was no different from that of some of my classmates’ work. It wasn’t perfect but I was quite proud it. After my BA in animation I went on the study MA Character Animation at Central Saint Martins. This was where I learned stop motion puppet animation, with this medium I could bring another of my interests – fabric design – to my animation. During my end of year project I ended designing the fabric worn by my characters in my short film titled Stories My Mother Told Me. After university I took a year break and after that I set up a studio at home and in collaboration with my sister we made the first episode of My Utopia.

Tell us a bit about your practice?

I am an independent filmmaker. I make my own short films and I also just started
taking on a paid project. I work in 2D computer animation and stop motion. I make 2D short films using Adobe Photoshop, Illustrator, Flash, Premiere Pro and TV Paint. I also do stop motion puppet animation. I make the puppets, design their clothes, build sets, or sometimes collaborate with my sister, who also make sets and I shoot the films. I enjoy storyboarding and turning the text or audio recording into visual storytelling. I love working in both mediums but if I have to choose, it would be stop motion. When I am working on a stop motion project, it’s like I am a child playing with her toys. Every aspect of the project is fun including when I run into a complex problem like how to make traditional clothing for a puppet, or how to build a puppet that transforms into something else. Finding a solution to such problems becomes an adventure in its own.

Has the lockdown / past year effected you creatively at all?

I don’t think so because I work from home anyway and also during this time I was in
the process of making My Utopia. All it did was cause the project deadline to be
extended which was a good thing for me because it gave me more time to create the wonderful storytelling and visual masterpiece I had envisioned.

What have been some of the best things you’ve seen/read/heard in the last
year?

While making puppets and their clothes, I tend the watch a lot of animation on YouTube and TV programs on my computer; animated shorts like Hair Love. Although it came out in December 2019 I didn’t see it till 2020. It’s about a father learning to tame his daughter’s afro while her mother was in hospital recovering from cancer. I especially like the end when the mother was feeling insecure about her lack of hair and the little girl was there to give her some confidence just by showing her a drawing she had done of her with bald head and a crown on. Another one is titled Father which is a 2D animation that just opens with a coat hanger on a string outside fighting against the wind to stay on no matter what, while we see the wind blowing away other clothes. In the end, when the weather is cleared you find out that within itself it had been protecting a female dress representing mother, a little girl dress representing daughter, a little boy’s T shirt for son and a baby’s onesie. In my opinion that is beautiful storytelling which shows us the lengths a father will go through to protect his family. Other shorts like Tokri and Nobody is Normal. An animated series called The Dragon Prince, The Great British Sewing Bee on the BBC. As a dyslexic reading is not my favourite pastime so I didn’t do it that often during lockdown, except for when I was researching for my film or to see a story that interest me either on a blog, magazine or a book.

I have three personal projects that I have been working on simultaneously. I am in the process of writing a proposal for funding to make 11 episodes of My Utopia. The idea for the rest of the episodes is to get people with other disabilities to write 90 words of their ideas of a Utopian city that caters to their access needs.

The second project is episode two of Stories My Mother Told Me. I am currently doing
the storyboard at the moment. And the third project is a short film titled The Memory
of Love, written by Maria Zavakou. I finished the storyboard a while ago and took a
break from it to make the first episode of My Utopia. Now that that is finished I am
back on it and am in the concept art and character design stage.

Do you have any final remarks?

My project My Utopia needs 11 stories for each episode so if there is anyone that’s
interested in sharing and seeing their idea of Utopia animated please send me an
email with written 90 words of your ideal Utopia world in relation to your disability and access needs. Please see the video linked at the end of this piece, for an example of how your 90 words will be portrayed as animation: https://youtu.be/jOC1ChQEPOo