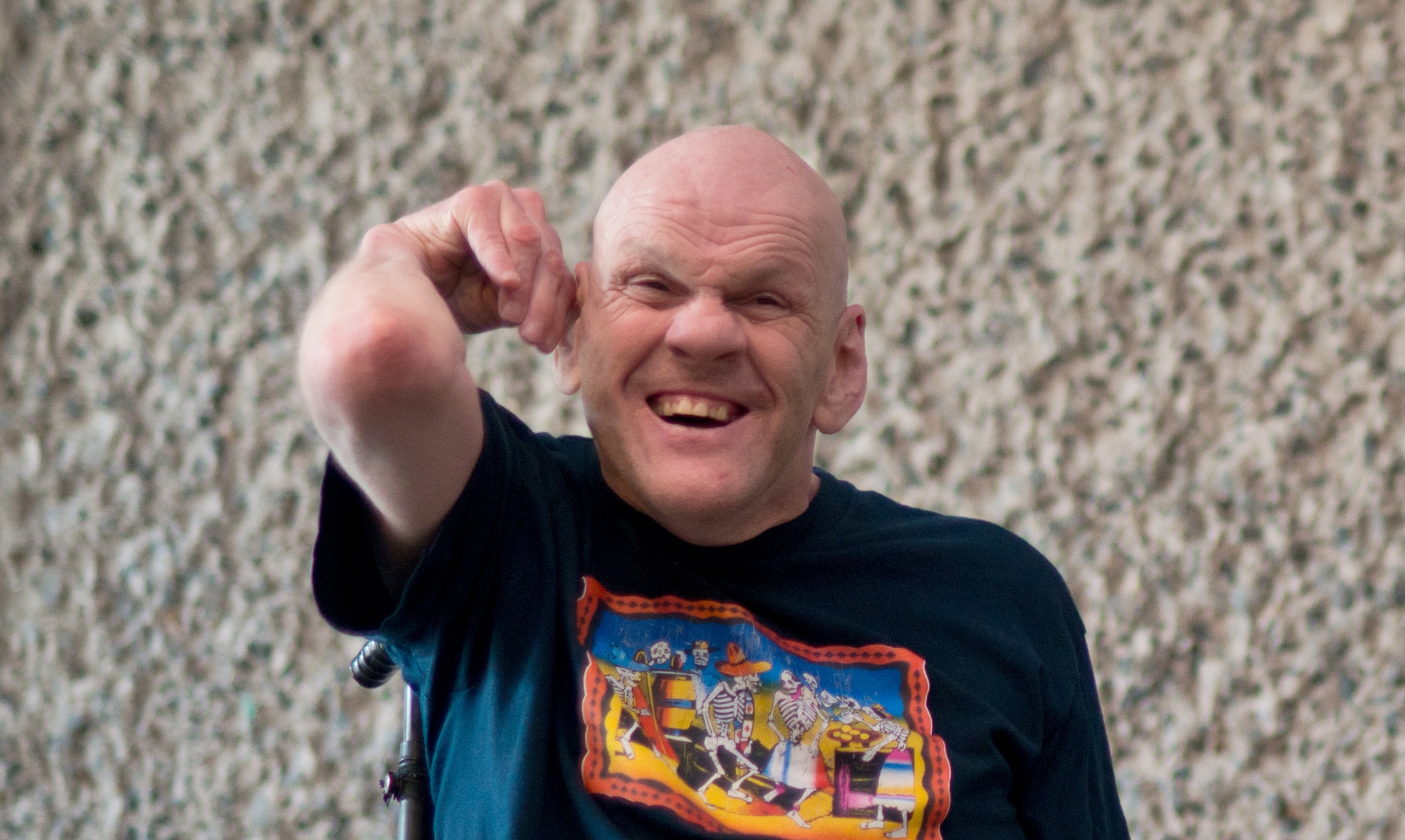 For the first in our new series of artist interviews, we spoke to filmpro Associate Artist Pete Edwards about his early love of the stage and why we need more opportunities for disabled actors. Read the full interview below.

Hi Pete, thanks for chatting with us today. What’s interesting you at the moment?

Currently I’m in the final stages of completing my book, which I began writing eight years ago. The book is based on my early experiences in life. It explores the lives of a group of boys that attend a special needs boarding school in the seventies. One of the boys is Catholic, and is very attracted sexually to another boy, which causes fear and anxiety, for his parents and himself.

Writing the book over this length of time has been enjoyable, and I would have to say, it was almost like having therapy where you just write and write your own thoughts, without anybody asking questions. I have just loved the process.

Talking about my childhood through the eyes of the character has made my writing technique gratifying, because I could remove myself from a lot of my experiences, which could be somewhat painful.

Can you tell us a bit about how you got started, working in the arts?

From an early age I was told that with my differing speech pattern, I would never work as an actor, but acting was what I always wanted to do. At school, I would be fighting for any part in the Christmas Pantomime. My first role was ‘the mirror’ in Snow White and the Seven Dwarfs. I was always given the ‘silent-parts’. After school I took part in many drama workshops, classes and courses.

My first experience was when I did a ten day’s workshop with Graeae Theatre Company in Cumbria. I was really amazed by the inclusive work they did. They inspired me to continue my quest.

Another acting class, which I found to be amazing was at Morley College. This course opened up a whole new world of possibilities, including working with abled bodied actors.

My next wonderful opportunity was to be given a space on ‘Missing Piece Four’, a years’ acting course organised by Graeae and The London Metropolitan University.

This was a fantastic grounding to have for my future in the arts. For my final exam I wrote and performed ‘Fat’, a 20 minutes solo performance piece.

At the end of ‘Missing Piece’, I developed Fat into a 60 minutes one man show, which was directed by Michael Achtman.

Myself and Fat went on tour to the DaDa Festival in Liverpool and the Edinburgh Fringe Festival.

Fat was absolutely ground breaking, and I think it broke the mould. For me, I hadn’t come across anybody with Cerebral Palsy and a differing speech pattern, who has written and performed the show.

Tell us a bit about your practice, and what mediums you like to work in?

Acting has always been my first love. However, I have enjoyed facilitating ‘acting workshops’ for people with disabilities and differing speech patterns and looking at the way they might want to put across their voices. Exploring different ways of communication and working with different kinds of media. This process has helped me as well in my personal practice. I have also worked in film, (Welcome Stop, written and directed by Michael Achtman). It is something I would love to explore more.

As an actor with a differing speech pattern, it is sometimes hard to fit in with the rhythm of the speech patterns of other actors. An example of this would be my taking part and performing in ‘Purposeless Movements’ which was a performance piece written for four actors with differing degrees of cerebral palsy. At the time it was quite ground breaking to have four disabled actors with differing speech patterns on stage all performing the same piece. Therefore, I might enjoy working with other actors, but for me working alone on stage is less stressful. My experiences in ensemble work have been so interesting and useful for my ongoing work.

Having written, devised and performed, I would love to try my hand at directing.

I believe that experiencing all aspects of the art of performance will make a more rounded director.

Has the lockdown affected you creatively at all?

Lockdown has had an adverse effect on me. I have been writing my book most days and enjoyed it immensely. Can I just say at this point the way I write is slow because I have to use a special computer program called THE GRID. Because of my disability I cannot use a keyboard. I use a switch with my knee that operates the system, but I have to spell each word letter by letter, which can be time consuming and that is why it can take eight years to write a book.

What have been some of the best things you’ve seen/read/heard in the last year?

Crip Tales on BBC. In this program people with disabilities perform dramatic monologues of tales of life changing events.

I feel it is a shame that there are not a lot more programs that include actors with disabilities. I don’t understand why more disabled people aren’t represented in every aspect of the Arts, or, why in discussion programs we are just asked to discuss about disability issues.

I’ve just been offered a part in a two-handed short film called Orbits, in conjunction with Birds of Paradise Theatre Company. The film is movement based, with some possible text additions.