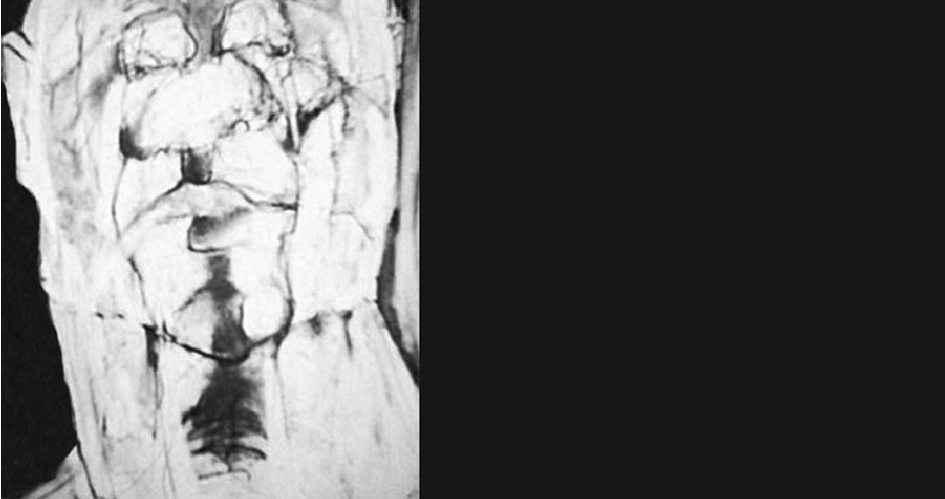 Many Faces of Alexander’s Many Faces was an installation in the form of a narrative, representing her Discrimination personal experiences of employment disability discrimination. The art piece recreated her journey from discrimination to Employment Tribunal, which also proved to be discriminatory in its access provision.

In collaboration with Jon Adams (sound artist) and Caglar Kimyoncu (filmmaker) she created a rhythmic narrative which was full of misunderstandings, negativity, elimination and repetition, reproducing the unacceptable face of discrimination and the impact it made on the individual.

Her immediate creative response to discrimination was a series of charcoal drawings repeatedly erased, photographed and redrawn on one piece of paper, unconsciously imitating the ‘wiping out’ of the person when discrimination occured.

Certain sounds were recorded and then scrambled and stitched to new images. The recordings were from the voices of fellow deaf and disabled artists talking about their own discrimination experiences, of Alexander reading the transcript of her Employment Tribunal. She is a Buddhist and her chanting and ringing the bell was also recorded. These recordings were scrambled and no original words can be detected. Working from her brief, Jon Adams, produced a haunting and emotive soundscape recreating the anguish, hurt and frustration.

During the ongoing Tribunal process Alexander was able to re-evaluate her original subjective responses and created new artwork. These new images were drawn in charcoal on the original piece of paper, continuing the same process of repeated erasing and recording of the images and then digitally manipulated. She superimposed some of her images onto her own photograph, reflecting the limited thinking that some people projected on to others.

The sounds were then seamlessly stitched to her new images by Caglar Kimyoncu.

A second projection of ‘sound patterns’ taken from specific words such as ‘powerless’, and ‘complete fiction’ along with sounds that were extricated from her charcoal drawings, were projected onto the audience to draw them in to the experience of what discrimination looked like, felt like and sounded like.

The installation reproduced the destruction and the necessary resurgence and construction of one’s self of self for a healthy recovery. It was a narrative, with a rhythm to the process…. There is no ending yet…